Today we launched Patterns in the iOS app store. Patterns is an app for logging, tracking, and reporting on your trail cam sightings. It's been an idea we've been kicking around for a few years now, and we've been testing it for a few months as we pulled cards and scouted for hunting season.

We've tried a few other trail cam (or camera trap) management apps and software, and we just couldn't find anything that fit our needs. After a frustrating evening of logging sightings manually into a spreadsheet, we decided maybe there was a better way. We tried to lay out everything that was missing from the existing tools and quickly realized it was something that we could likely build ourselves.

The first thing we identified was that none of the tools supported video. We've always preferred to use the video mode on trail cams – it gives you a better idea of behavior, and it's more exciting to check the cams and view the footage. Video is a problem for these tools for a few reasons, but the main reason is that these tools are built to process images automatically for you. The software looks at the image, sees something that looks like it might be a buck, and tags it as a buck for you. Then you're meant to trust that or go back and double-check and correct it if the system got it wrong (and it gets it wrong a lot). This doesn't work with video because a video is a series of images, not a single one. So with these tools, you immediately lose the ability to auto-tag things, and that's where they claim they shine.

So why not process the video and look at every image? Well, even if you process the video, you've got to deal with the storage of those video files. Videos are much larger than images, and most of these tools store your images for you and charge you based on your usage of that storage. So storing video would quickly become a big expense.

We started thinking about that problem, looking at our spreadsheet, and thinking about how biologists track data from camera traps. That's when it hit us: images and video are fun to share with your buddies, but the value is in what the image or video tells you. See, we've been storing what the video told us in a spreadsheet, not the actual videos. After that realization, we quickly realized we were on to something that might work for us, and Patterns was born.

When you pull your cards from your trail cams, you'll review them just like you typically would. That can be with a computer, laptop, card reader, or anything else. When you have a sighting you want to track, you open Patterns, select the cam that had the sighting, create a new sighting and log what the image or video is telling you: date and time, the game, and the direction of travel, and you can also add an image if you'd like. We'll pull the weather based on the closest weather station automatically. That's it – it's a manual process. Currently, there's nothing automatic going on other than fetching the weather, but we've streamlined adding a sighting as much as possible. 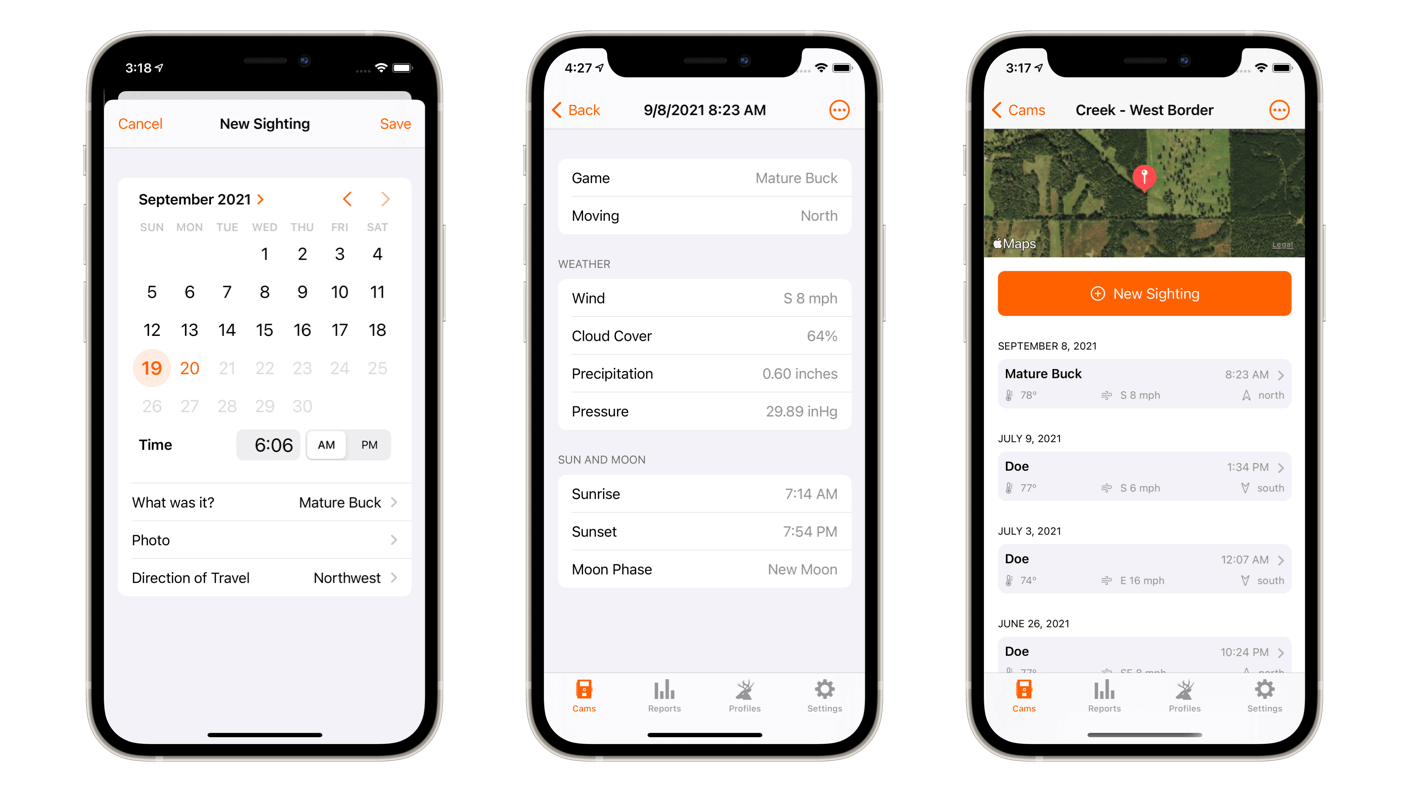 You might have a knee-jerk reaction to logging sightings manually yourself, but the truth is, you're probably looking at each image and video individually anyway. You shouldn't trust something to identify images automatically, especially if you're trying to pattern a specific animal – not all trail cams do great at night, and you may catch something that the software didn't.

You can log as much or as little as you want. I log everything to get an idea of doe:buck ratios at specific cams, but you could log mature bucks only if you want. You could also log predators to see if you might need to thin some out for fawn season or just to have a big picture of what's going on at the hunt area you're tracking. It's totally up to you.

Once you've got some sightings tracked, you can view reports to see what the sightings are telling you. You can view which cams have the most bucks, what time they're moving, how the wind plays into that movement, etc. Reports are really powerful, and you can view it for all sightings, or drill down into a specific area, cam, or even type of game.

Profiles are a more focused way to track sightings and report on them. A profile is a named individual animal. Say you have a buck identified as "Butch" on your farm. When you add a sighting you can choose "Butch" from the list, and it'll be logged under his specific sightings. When you view Butch's profile, you'll see all his sightings and the reports on what cameras he frequents, what time he's moving, etc. 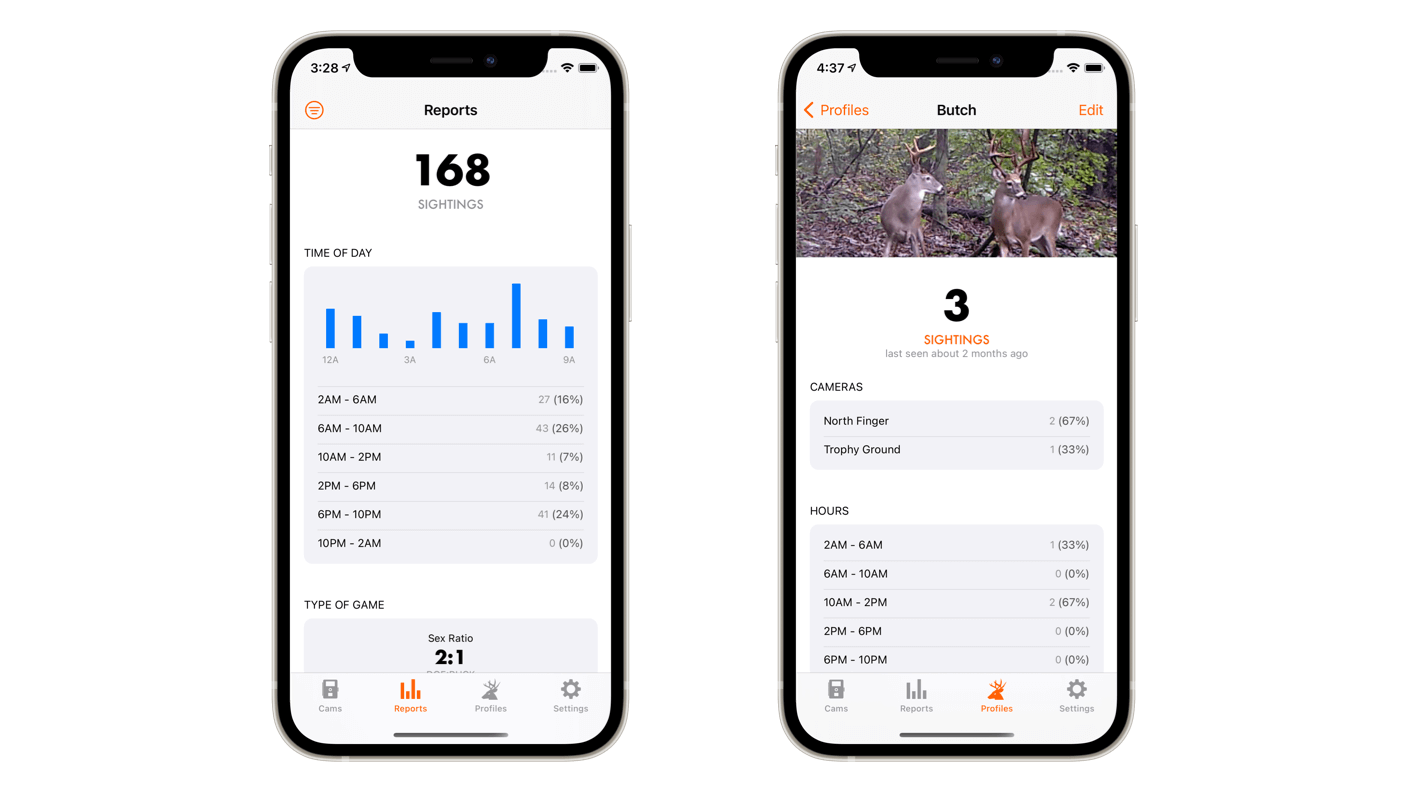 So to wrap it up, that's Patterns: A trail cam journal or logging app that plays well with video and is simple and easy to use. We're just getting started with it, but we wanted to get it out the door, so some folks could start using it before we're too far into the season. It might not be for everyone, but it's exactly what we think is missing, and it works great for us. We hope you try it out on the app store and be sure to let us know what you think!